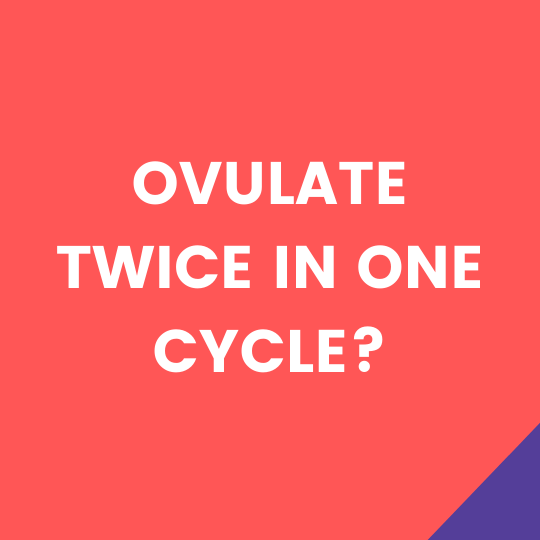 Ovulating twice in the same cycle is a pretty common myth. But, the evidence tells us that you simply can not ovulate multiple times in once cycle.⁣⁣⁣
⁣⁣⁣
I’m not talking about ovulating multiple eggs at once, as fraternal twins are all the proof you need to know that that is not a myth 😉. But I’m talking about ovulating on a certain day, and then ovulating again a couple of days later.

This myth must’ve come from both the TTC community and the scientific community. A paper was published back in 2003 where researchers found a second (or even third) LH surge after ovulation, and they also observed what looked like a second ovulation. ⁣⁣⁣
⁣⁣⁣
Theoretically, this seems impossible. After ovulation, progesterone levels rise which prevents a second ovulation from happening. Perhaps unsurprisingly, other scientists found big flaws with the methodology used in the 2003 study and no one has ever been able to show that ovulating more than once can actually happen (and believe me, they tried!).⁣⁣⁣
⁣⁣⁣
From within the TTC community, there are reports from women getting positive OPKs a week or so after ovulation. Yes, some women do have a second surge of LH. However, if you’ve already ovulated, this won’t lead to another ovulation.⁣⁣⁣
⁣⁣⁣
The American Pregnancy Organization concludes: “A woman should not ovulate more than once during each cycle. This is due to a careful balance of hormones and their levels – it takes just the right timing and release of hormones to bring on the release of a mature egg”⁣⁣.
⁣⁣⁣