A really good way to see if you’ve ovulated when you think you did is by tracking your basal body temperature (BBT).⁣
⁣
Your BBT (which is your body temp at rest) can tell you a lot about your menstrual cycle and if you’re ovulating.⁣

The chart on the left is a typical example of an anovulatory chart. That means that you didn’t ovulate in that cycle. There isn’t a clear upwards shift and the temps just go up and down. For some, the temps fluctuate a lot less… but the idea is the same; there is no clear sustained upwards shift in temperature.⁣ 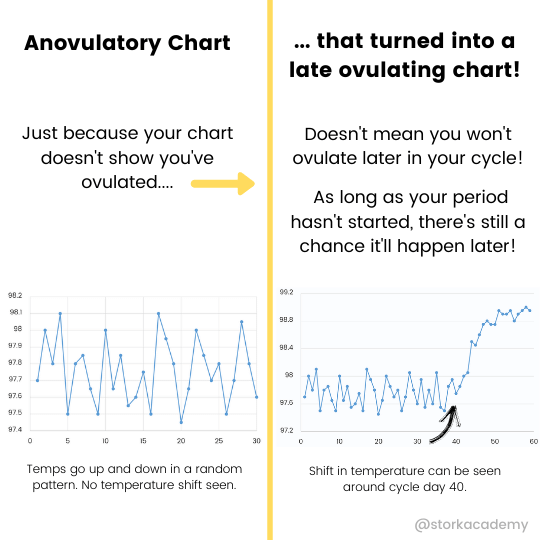 ⁣
But even though your chart may appear anovulatory… it doesn’t mean it can’t turn into a (late) ovulatory chart! And that’s what we see on the right. ⁣
⁣
In this example, the shift happened around cycle day 40, a lot later than you might expect! This is especially common in women who have been diagnosed with PCOS for example. ⁣
⁣
The good news is that *if* you catch your fertile window (aka don’t give up temping, and keep testing with OPKs or checking your cervical mucus!) your chances of pregnancy are no different than if you ovulate earlier in your cycle.⁣
⁣
So I guess the moral of the story is… don’t give up!! 😊⁣