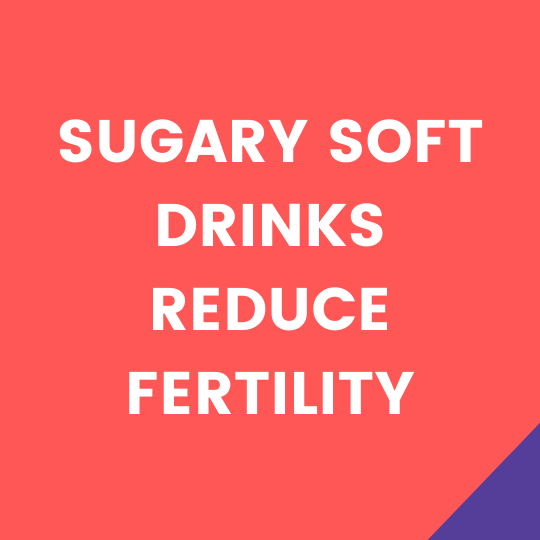 It’s probably not a big surprise that sugary drinks aren’t that great for your health… but does it also impact your fertility?⁣

Well, a group of researchers wanted to find out! ⁣

About 4,000 women completed a series of questionnaires from the time they started trying to conceive (within 6 months), up until a year later or until they got pregnant (whichever came first).⁣ The male partners were also asked to fill out a survey on diet and lifestyle factors.⁣

Well, it turns out that women who had 1 or more sugar-sweetened beverages per day (7 or more a week) were on average 2 years younger compared to women who indicated they don’t drink any sugar-sweetened drinks a week. But even though they were younger, they still had a harder time getting pregnant. On average, they had a 25% lower chance of getting pregnant each month, even after the researchers adjusted for factors like BMI, caffeine intake, smoking history, and how often the couples had sex!⁣
⁣
And for men, the results were even worse. Men drinking 7 or more sugary beverages per week had a 33% lower chance of getting their partner pregnant in any given month compared to men who didn’t drink any sugary sodas! ⁣
⁣
They also found that men who consumed more than 1 sugar-sweetened energy drink a day had a 56% lower chance of getting their partner pregnant! Although this percentage is based on a really small number of men in the study, so it’s not completely clear how bad energy drinks really are. But needless to say, it’s probably not great for fertility.⁣
⁣
And it’s not just one study that shows this! These results are in line with other studies that found lower sperm motility and semen volume in men who drink sugary beverages.⁣
⁣
Luckily, in this particular study… there were no negative effects found between diet sodas and time to pregnancy. So the researchers concluded that the effects were most likely due to the amount of sugar instead of things like BPA-lined soda cans.⁣
⁣
So if you needed a reason to lower your intake of sugary drinks… this is it! And if your partner has a habit of consuming lots of sugar-sweetened sodas… it’s time to switch them over to drinks with less/no sugar too!⁣
⁣