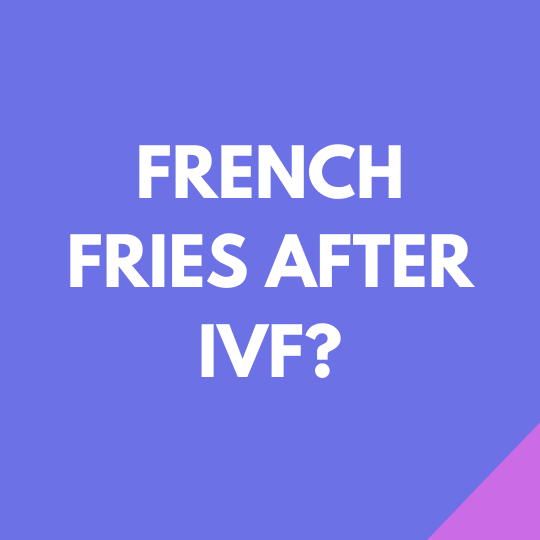 If you’ve been part of the IVF-community, you’ve probably seen at least a few dozen posts of women making the drive to McDonalds after their embryo transfer.

Is there something about embryo transfers that makes everyone crave a greasy burger with french fries? Do fertility clinics hand out coupons to use at Mickey D’s that are only valid within an hour of embryo transfer?

Well, no. Couples make the drive to the Golden Arches because: 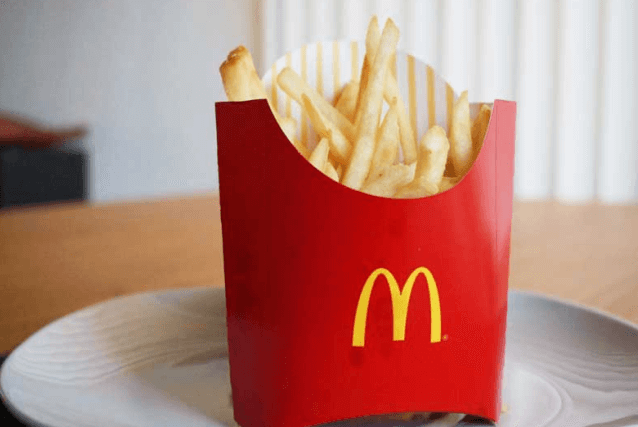 In the name of blog post research, I made a stop at McDonald’s to carefully dissect the fries and analyze them under the microscope. (Okay I lied, I got hungry for french fries after writing this post).

So what is it about french fries that could aid in embryo implantation? Are the fries themselves the key to success? Or is it the oil in which they are fried? Perhaps the seasoning?

I couldn’t really think of any specific reason but saw plenty of discussions online claiming success by eating those damn fries.

Of course, as discussions like this often do, the mood quickly turned as some people claimed McDonald’s uses pesticides and other chemicals that cause infertility. And that you’d pretty much be in imminent danger even driving past a McDonald’s!

I found out that this French fry tradition wasn’t anything new either. Some posts were from 2006!

There’s only one problem with this intriguing and delicious way to boost your chances of success; the lack of scientific evidence. I searched everywhere, trying to find any evidence that could give us all just a tiny bit of hope that eating french fries might help. I tried looking for specific ingredients, the type of oil used to fry, the seasoning… nothing.

Plenty of unscientific claims were found though. Ranging from, “fat makes your uterus more sticky so the embryo has a place to nest in”, to “the salt used by McDonald’s draws the embryo closer to the womb”.

Unfortunately, that’s not how our bodies work.

How it All Started

Who came up with this and how did it get so popular?

It seems to have started by doctors recommending patients at risk for ovarian hyperstimulation syndrome (OHSS) to eat salty foods after egg collection.

A quick summary of how this might work; OHSS develops in about 1% to 10% of women undergoing IVF. There is fluid accumulation around the ovaries and the abdominal cavity which causes a lot of pain. The fluid is loose and needs something to bind to so that it can be moved out of the body. Salt does just that, which is why eating salty food is often recommended after IVF stimulation.

Doctor [after egg retrieval]: So, remember, eat some salty foods when you get home okay?

The patient takes the advice to heart and makes sure to eat fries every day from the day of egg retrieval until the day of embryo transfer.

She winds up getting pregnant. Her friends ask her what she did differently this time around and she tells them about the fries. Boom! Tradition started!

Sounds plausible if you ask me!

With the knowledge that salty foods can be helpful to fight OHSS in mind, I can understand why fries could benefit women who undergo a fresh transfer. But… what about all those frozen embryo transfers (FET)? The risk for OHSS has completely passed, yet many still swear by eating french fries in frozen cycles!

The initial thought behind it all may have been to reduce OHSS symptoms, but as IVF tends to get a lot of people pregnant, it shifted to being a general recipe for success.

Well, as you now know, eating french fries is -unfortunately- not a general recipe for success, but all things considered, it’s a pretty benign habit. It may not be the most healthy thing to eat, it’s not going to hurt your chances of becoming pregnant either.

So do you need to make the drive to Mickey D’s after transfer?

There’s no evidence to support that eating french fries after transfer benefits the implantation process in any way.

Unfortunately, correlation does not equal causation. In other words, just because some women who ate French fries got pregnant, doesn’t mean that French fries caused or even contributed to the pregnancy.

I think that for most people, it’s just a fun tradition. Snap a picture of your feet up in the stirrups followed by you at McDonald’s, and the IVF-community knows exactly what that means; you just had an embryo transfer!

As an added bonus: it’s also the perfect excuse to get your fast food fix.

Either way, I think we can all agree that people shouldn’t stress out in case McDonald’s is out of fries that day (does that ever happen?) or if they went to Burger King instead.

Progesterone Levels Much Lower Than Last Cycle? Read This!

So your progesterone levels seem to be all over the place... what gives!⁣? I get this question in my inbox a few times a month, so let's try to figure out what's going on! Progesterone is secreted...

END_OF_DOCUMENT_TOKEN_TO_BE_REPLACED

It's probably not a big surprise that sugary drinks aren't that great for your health... but does it also impact your fertility?⁣ Well, a group of researchers wanted to find out! ⁣ About 4,000 women...

END_OF_DOCUMENT_TOKEN_TO_BE_REPLACED

Basal Body Temping: From Having no Ovulation to Suddenly Ovulating!

A really good way to see if you've ovulated when you think you did is by tracking your basal body temperature (BBT).⁣ ⁣ Your BBT (which is your body temp at rest) can tell you a lot about your...