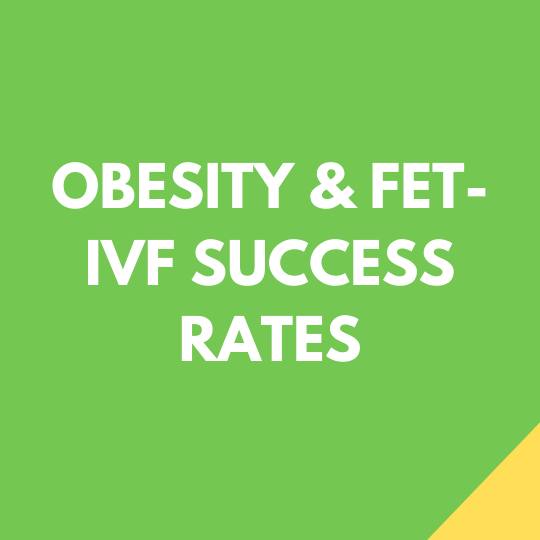 Does Obesity Reduce the Odds of Success After a Frozen IVF transfer?

Yes, another post about fertility and weight! But luckily, I bring some good news this time.⁣
⁣
Studies have shown that in FRESH IVF cycles obese women have a lower success rate which is thought to be due to uterine receptivity issues.⁣

Researchers from France wanted to know whether the same was true in frozen cycles (FET).⁣ In this particular study, 958 women were included who had a frozen embryo transfer between 2012 to 2017 at a French fertility clinic. All embryos were transferred on day 5, the blastocyst stage.⁣

After dividing women into normal weight (BMI >18.5 and <25) and obese (BMI >30) groups -a BMI suggesting “overweight” of >25 and <30 was purposely excluded- the researchers set out to see how they compared.⁣ Both the normal and obese groups had similar embryo quality, and both groups of women had the same number of embryo’s transferred (84% were single embryo transfers). ⁣

So Does Obesity Reduce Success Rates?⁣

The clinical pregnancy rate was the same (about 22%), the miscarriage rate was slightly higher among obese women but within the margin of error (10% vs 7%), and the live birth rate was almost the same too (19% vs 20%). ⁣

That’s not bad at all!⁣

The researchers seem to think that these results might be explained by obese women’s uterus being less receptive in a fresh transfer due to ovarian stimulation hormones affecting their bodies differently.⁣ But, frozen transfer cycles don’t have this issue.

And although this research is preliminary and needs confirmation, it does suggest that among obese women, frozen transfers could be a good alternative to a fresh cycle.⁣