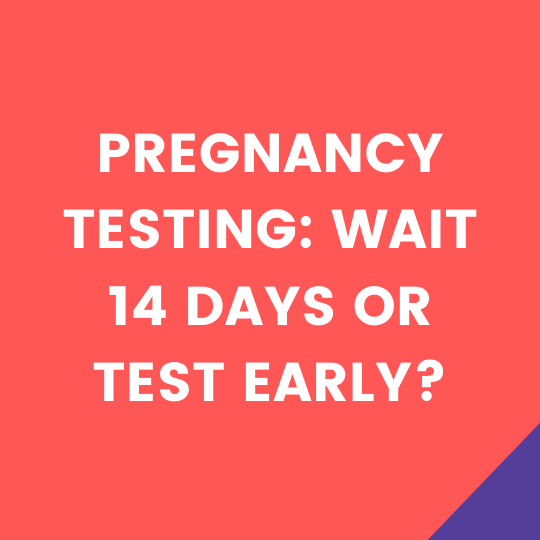 To Test Early or to Test Late…

When it comes to Trying To Conceive (TTC)-personality types, we can be divided into two groups: ⁣⁣
⁣⁣
1️⃣ Those who test early⁣⁣
2️⃣ Those who don’t⁣⁣
⁣⁣
Those in group 1 get a bad rap. I’ve heard that we’re impatient and we’re setting ourselves up for disappointment… but I disagree!⁣⁣
⁣⁣
I’m a huge fan of testing early for many reasons, the top 3 of which are:⁣⁣
⁣⁣
➖ Using it as a Coping Mechanism
If you DON’T test early, you may get your hopes up convincing yourself you’re pregnant for 2 whole weeks only to be crushed by a big fat negative at 14 days past ovulation, or a surprise visit from aunt flow! ⁣⁣
⁣⁣
Instead, if you start testing at 8-10 days past ovulation you know that the first few negatives could either be due to testing too early (the embryo hasn’t implanted yet or hormone levels are too low) or due to you not being pregnant. With every passing day, you’re SLOWLY preparing yourself that you’re out.
⁣⁣
➖ Predictor of a Viable Pregnancy
If you ARE pregnant; getting a positive early on is a very good predictor of a viable pregnancy. The later the embryo implants, the higher the chances of an early loss. So if you get a positive on 10 days past ovulation, you know that the embryo implanted early. Research shows that embryos that implant on 9 days past ovulation or earlier have a 13% chance of ending in an early loss. Compare that to embryos that implant after 11 days past ovulation: 82%! That’s quite a big difference. So getting a positive early on is a very good sign!⁣⁣
⁣⁣
➖ Using it as a Diagnostic Tool
What if every cycle, you end up pregnant but every cycle, it also ends in an early loss? Yes, that’s an incredibly painful experience and I realize that some women would rather NOT know. But you know what may just be even worse? Going months/years without getting the proper medical care from your doctor who may be able to help you sustain a pregnancy. Your treatment plan could look very different from someone who never tested positive to begin with!⁣⁣
⁣⁣
In the end, it all comes down to what YOU want to do. Do you want to test early? Go ahead (wait until after it’s physically possible to get a BFP though, so 8 days past ovulation or later). If you’d rather not; don’t do it.

And that’s all there is to it 😊⁣⁣